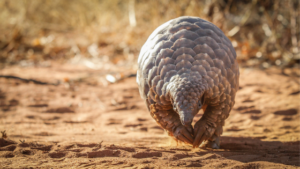 To learn more about what the Pangolins are facing, please watch this short film featured on NatGeo and produced by Coral and Oak Studios. It is mildly graphic, and NOT intended for the children to view.

Excerpt from the film: “Pangolins are considered the most illegally trafficked mammal in the world—scaly, cat-size, nocturnal anteaters found in Africa and Asia. Their meat and scales are in high demand for their supposed health benefits, and as a result the pangolin’s population has plummeted. It’s estimated that in the last 10 years, a million pangolins have been trafficked. Earlier this year, 4.4 tons of pangolin scales, labeled as plastic, were seized in Hong Kong, a haul estimated to represent between 1,100 and 6,600 pangolins and be worth $1.25 million (U.S.). Pangolins are now one of the most valuable animals to need protection, and bans are being discussed alongside those of iconic animals like elephants and rhinos.”